What is the Memory Project?

The Sierra Leone Memory Project is an oral history project dedicated to recording testimonies from survivors of the brutal civil war that occurred in Sierra Leone from 1991-2002, including former child soldiers, amputees, and survivors of rape. The project serves as a platform for justice, granting an avenue to the voices and experiences of those who were most affected by the war and continue to be most vulnerable in society. Moreover, it provides survivors room for individual healing through reflection and helps build a collective narrative. Audio-visual testimonies will help educate the public about Sierra Leone's post-conflict realities and further the Jeneba Project's goals of providing educational opportunities for Sierra Leonean youth.

In an interdependent world, no catastrophe is local. We must learn from the history of Sierra Leone and undertake the moral responsibility to prevent such crises in the future. We hope this project will be helpful in the advocacy against the abuse of child soldiers everywhere. This is an oral-history project dedicated to recording testimonies from all those who survived the Sierra Leonean civil war to ensure that the history of the civil war is preserved in order to help prevent a repetition of similar atrocities. The goal is that full-length testimonies, as well as shorter and more accessible video clips, will be available to the public, accompanied by written transcripts for easy browsing online. Testimonies will be presented in numerous ways as part of larger educational programs for high schools and colleges in Sierra Leone and the U.S. and, ultimately, as an exhibit in a future memorial in Sierra Leone, which the Jeneba Project aims to help develop at a later stage.

We are calling on all Sierra Leoneans with first-hand experiences of the 1991-2002 civil war to participate by offering oral testimonies for the benefit of current and future generations. This project is intended to encourage those affected by the civil war to tell their stories as ordinary people who have survived some of the most horrendous moments of our shared history.

Others have already written several versions of our story, but our aim is to let your children learn from you. No Sierra Leonean would like to see a reoccurrence of what happened during that dreadful decade. It is only by reflecting on where we went wrong that we can guide future generations from wandering our line of failure.

Please contact us if you would like to participate. Jeneba Project staff will visit you to record your testimony.  All stories are video recorded and will be available for public view. We also accept written testimonies from those who do not want to be audio/video recorded.

An Interview with Barrister Francis Kaifala 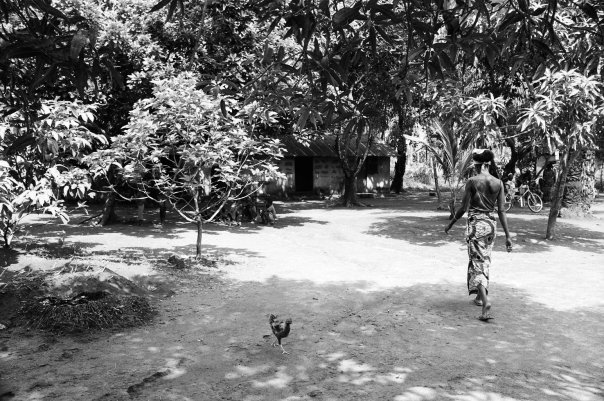 I went to school and made it as far as form one (seventh grade).  My father’s house is right across the street from here.  My father died during the war and my mother was separated from us.  I don’t know whether she is dead or alive.  My sister lives with me and my brother is in Koidu. We were farmers before the war.  My parents had a cacao plantation and we grew rice. I ate well and lived fine.  I used to go to school in the morning.  I ate before school, and there was always food when I returned from school.

I met my current husband before the war.  We were already talking about getting married. I was in my aunt’s village when the rebels entered Sierra Leone.  My father sent a message for me to return home.  That was the same time the Sierra Leone Army captured two rebels and took them to Kailahun.  By the time I got home, my father told me the rebels were already in control of Kailahun.  He told me to stay with him and not to go anywhere.

“HE RAPED ME IN FRONT OF EVERYONE...”

I remember when the rebels attacked Bandajuma and forced some youths to carry their loads to Burkina (Giehun).  They went through our village and told us to catch all the chickens and make them ready for the trip to Burkina.  When they returned, we cooked some of the chickens for them and they took the rest to Burkina.  Afterwards, they killed all the dogs and ate them, too.  Our village had lots of dogs and the rebels ate them all.  They also ate all the cattle!

One day, a rebel by the name of ‘Killer’ approached me for sex.  I told him that I was a virgin and “I don’t do that kind of business.”  He told me that I was the kind of woman they wanted…sweet.  My father attempted to intervene and rescue me from the rebels.  That’s when they forced him to the ground and cut his throat right there in front of me.  So I cried: “you have killed my father, why don’t you kill me too?!”  The rebel refused to kill me and said he wanted me as a wife, instead.

He raped me in front of everyone! My mother was watching, too.  Right there, in front of my father’s corpse.  They forced me down and pointed their guns at me.  I started to struggle, but my mother started to scream: Agree! Agree! Agree, so they don’t kill you!

The rebels raped me and returned to Burkina.  We buried my father in a shallow grave at night.  The rebels returned for food many more times.  When they ate all the food, including the dogs, they started arresting young people to go hunting for them.  One day, they instructed the youths to bring back five animals, but the boys caught only three animals and brought them to Superman (the commander).  Superman was unsatisfied and decided to complete the count with two human beings. “He killed two of the hunters on the spot and butchered them.”

Superman put the body parts in a pan and let the blood drain.  The rebels then drank the bowl of human blood. They took the bodies to Burkina and ate them.

"We were all afraid. Terrified!”  My mother said we should escape into the bush.  We built jungle huts called ‘Joe-bush’ and lived in them. I knew my boyfriend was in the bush as well, but we were all scattered in the jungle.

The rebels returned to the village many times, but there was no one there, so they decided to remove all the aluminum sheets from the houses and strategically place them around the village.  The aluminum sheets produced loud noise when people trod on them at night, and the rebels were notified of their presence.

After awhile, we heard that the NPRC (National Provisional Ruling Council), Tom Nyuma’s, soldiers were in Kailahun.  My mother said that we should go to Kailahun, but rebels on the way captured me, again.  They ordered me to go to Manowa River and look for food for them. I left my mother and went to Manowa. We went across the Mono River and found bananas, plantains and cocoyams. We were on our way back with five rebels who escorted us when we came across the SLA.  The soldiers killed the five rebels and arrested us because were carrying food for rebels in Burkina.

The soldiers initially took us to Segbwema and later to Daru.  One of the soldiers took me to his sister and asked me to be his girlfriend. I accepted. They fed me and looked after me. Later, the soldier decided to move to Kenema, and I went with him. He had become my husband. However, his commanders told him to return to Daru and leave me in Kenema.  Rather unfortunately, he was killed in an ambush on his way to Daru. His name was Michael Mustapha.

One of the soldiers who survived the ambush returned to Kenema and told me that Mustapha was dead.  I lived with the soldier who survived and his sister for a while, but he was transferred to Tongo.  I stayed with his sister, Musu Moses but we never heard back from him.  We concluded that he might have died in Tongo.

Musu and I decided to move to Freetown, since she had relatives there.  It might have been 1995 or 1996.  We joined a military convoy to Freetown. I met Aunty Fatu on the convoy and she told me that my boyfriend Philip was in Freetown.  She gave me a description of how to find him. I had become a sister to Musu and her family in Freetown accepted me as well.

Then one day I saw Amadu standing on the side of the road near Waterloo. I cried, “Amadu! Amadu! Amadu!” I wept! I was happy and sad at the same time.  I wasn’t prepared for the encounter, so my hair was rough; my clothes were simple rags, and I was thin.  I had lost weight, so I was very thin!

Amadu came over and hugged me.  I introduced him to my sister Musu and told him that I lived in Waterloo.  After the meeting, I visited his place a few times.  One day he brought me a bag of clothes and I was happy.  Musu told me that people made their hair in Freetown for money, so I started hairdressing in the veranda for some money.  I never even dreamed of returning to the village. I had no money or anything!

In the end, Amadu volunteered to return without me.  After awhile, I registered and was repatriated to the village, as well.  Everything is normal now and we are farming very well.

“Freetown was a tough life!”  “Too many mosquitoes, thieves and prostitutes.”  I am also glad that no other woman can hit on my man here.

This project was largely funded by Humanity in Action, an international educational organization dedicated to inspiring and connecting a global network of students, young professionals and established leaders committed to promoting human rights, diversity and active citizenship in their own communities and around the world.